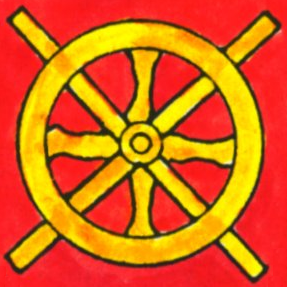 I also tried to give more attention to the ones with higher CHA (and hoped they'd play by their score). But it's hard to override the natural interactions, player CHA prevailed over character CHA.

We’re like all character names all the time when we are talking about the game. Even when scheduling or like passing the snacks. We have a high turnover rate for characters so this helps us learn the new character names. Except that Jalara has been alive for 67 sessions somehow. The Corsair Queen of the Sunless Island…

I have fucked up vision (why am I even a painter…!?) so I couldn’t see name tags anyway.

We don’t use Int/Wis/Cha in the normal way so that problem’s solved too.

@Sandra @jmettraux "Address the characters, not the players", a principle PbtA tought us. @kensanata

Hear that, @lumpley? People picked up something cool from your game♥♥