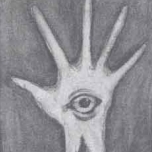 Small plots and machinations involving the Dissenter (Aboleth offered help finding the Ultralith's secret lair in exchange for Elder Brain parts) and the Keeper of the Vats (brainless construct now running the Mindflayer Sept, who needs brain parts to make another non-Thoonian brain).

Aboleth informed them about the Rod of Ahn they found, allowing them to cast spells 'ana'. Archmage did so with Arcane Eye; explorations in 4D space proceeded.

4D explorations found the outside of Vecna's sequested temple they'd been inside of previously, but archmage got sidetrack into following a different light source; discovered a Kaorti mining operation; they broke off shards of broken realities, collected them, and fermented them in void pools to make food.

Many divinations, visions and auguries later, and (next session) the party is likely to accept Aboleth's help to find the secret lair, also inside Vecna's Adytum.

Has anybody done a 3D hex-crawl? Or whatever pythagorean solid packs fully in 3D space? Because this leads me to wonder how I'd do this in a sandbox style, with 4D maps of space (tesseract-crawl?)

Also, I had crazy dreams trying to visualize the Archmage's explorations last night.

Show thread
0
Sign in to participate in the conversation