Hey there, I'm Sean McCoy. Co-founder of Tuesday Knight Games and designer of games like Two Rooms and a Boom and #mothershipRPG. Glad to be here. 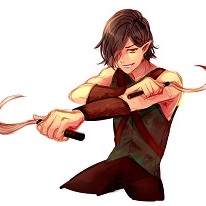 @seanmccoy Quick question, Mr. McCoy: asking as an Engineering major, why did you decide to put engineers in the Teamsters class as opposed to Scientists in your #mothershipRPG? We have to know a lot of science in order to do our jobs effectively, after all!

@Psychoboy hey there! Can you be more specific? Engineering is a skill that any class can unlock.

@seanmccoy Another issue I have is the implication that just "anyone" can learn Engineering, but we'll get to that later - in your game, the engineer is a subclass in the Teamster build, supposed to be the more "rough-and-tumble" class, and less intellectual than the scientists. Speaking as an Engineering major, I would put Engineers into Scientist, since we need a very specialized skill set more akin to the natural sciences than to piloting a ship or mining asteroids.

@seanmccoy Okay, let me try putting it this way; here's what you have on your About page for Teamsters: "Teamsters, the rough and tumble workers. More versatile at first level, Teamsters can be anything from engineers, to pilots, to asteroid miners." Which sounds like you're saying engineers are rough-and-tumble workers.

@Psychoboy I see where the problem is. I thought you had read the rulebook, not just the ad copy on the website. Nowhere in the rules does it say what you’re quoting above.

@seanmccoy Okay, I see. I was under the impression that Engineer was strictly under the Teamsters section. Thank you for clearing that up.