I also drew Konrad Curze along with Sanguinius because I've been reading Night Lords and the random thing chooser picked him. I had fun with him.
Side note: I hope this still fits in with the tabletop theme.

I've been enjoying 40k lore again and decided that I should try to relearn basic subject flow and NOT micromanaging every stray pixel in my line art with some casual primarchs. Sanguinius lacks consistent reference though, and this will always haunt me. 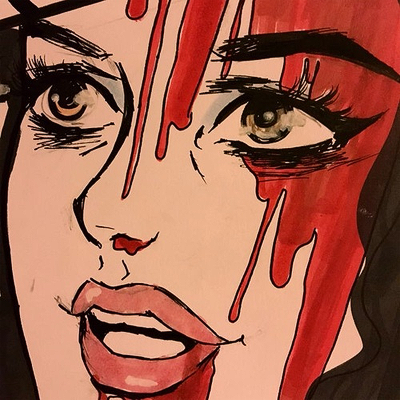 It's certainly been a hot sec. Things got kind of busy despite finals being over. Now, however, things are not, so I drew 40k Mortarion to get over the start of art block. His face might be melted but he's surprisingly fun to draw.

I actually started this Warmachine Deathripper a few weeks ago, but then I had to stop to study for finals. I don't know what we could use him for in D&D, but I kind of really love him.

My D&D group got together to do a oneshot, but instead only made characters and watched movies. This is Oliver Rask, a human arcane trickster. A famine struck his village, so he was sent to find a magical beast hidden away in the mountains that would solve every problem ever. Problem is, this beast doesn't actually exist and is an excuse used to lower the number of mouths to feed, but instead of dying, he discovered magic and a goat that probably isn't actually a goat. Its name is Figgleward.

Finished with my finals. Let the mini painting commence. 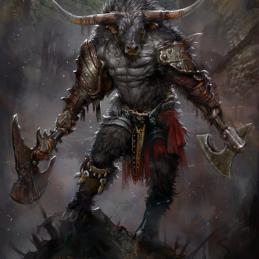 I'm looking forward to finishing my finals tomorrow. I have many minis to paint and a cosplay to finish.

This is my Aarakocra tempest/storm sorcerer. He yells a lot because he's partially deaf. Signature move is Bean Throw, to expel demons (see Setsubun). DM thought that was hilarious so now they sting evil-aligned creatures upon contact.

This is my D&D war domain cleric, Matthias aka "Matti", affectionately known as the murder priest after murdering someone because his Heresy Senses were tingling.

#introductions Hi. I've been playing D&D for about half a year and thus far have had a blast. I'm in a few campaigns currently as a murderous human cleric, a vain sea elf bard, and an arakocra tempest sorcerer who's half deaf from all the lightning. Nice to meet you.