Pronouns
He Him They Them

Question about racism in Dungeons and Dragons.

#DnD #DungeonsAndDragons #Drow
So not being a #5e #5eDnD player did they finally fix Drow so that they aren't a blatantly racist concept?

Our homebrew completely took skin color out of the equation and made status of Drow be a moral choice that some elves made but they might have been any of the various Elf versions out there. 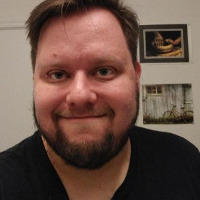 (Reposting because it got deleted, before I remembered I have other recourses for dealing with haters.)

BRW Games makes a RPG called "Adventures Dark and Deep", which is a really interesting role-playing game. It's based on extensive research into what Gary Gygax publicly said about his intentions for AD&D 2 before AD&D 2 was developed without him.

It also caps the starting strength scores of females from most player races a point or two lower than their male counterparts. This was retained for historical accuracy even though its something most OSR clones would and have done away with I think.

Ive refused to run it for years and haven't bought anything else from them because of how irritating that is to me.

Its also something most people don't talk about when reviewing the game; so it can really take someone by surprise when they buy it.
0
Feb 04, 2019, 18:17

#DnD #rpgs
A few years ago a friend of mine converted me to using wikis for all of my game notes both as a player and a DM. I own a couple of domains so I put up a copy of Mediawiki, change it to needing a login to get to the stuff in it and then can track information for everything from my character to a whole campaign setting. I give logins to everyone in the game to one so that we can all share notes and information. Today our player notes page broke 1000 pages. So that's a milestone.

That moment your stomach sinks is when your young child comes in very proud of how he has decorated his glasses... they are covered with stickers. Ugh Goo be gone please work.

#DnD
To continue I'm looking at WoL:
Bow of the Black Archer

This item is connected to Shevarash a deity from Forgotten Realms. Elven deity of revenge and hatred of the drow. So I need to weave a Drow element into the story to get this to work.

Now I have an interesting set of enemies to establish for this character. Luckily the homebrew uses the elven pantheon from forgotten realms. So there's not much written about Wild Elves for this homebrew...

#roll20
Anyone out there running on roll20.net? Looking to see if there's any crossover between here and that gaming platform. If you're not familiar with it I'm a fan. As someone who loves to game with their friends all over the globe this is one of my go to tools. Anyway I'm about to engage in a fairly large project that will involve creating stuff for there so I thought I'd see if there are people on here to share ideas with.

Hey all, I'm a Belgian/Flemish tabletop RPG player/dm. I mostly play D&D 5e, but I enjoy other systems as well.

I'm planning in becoming a DM, but I lack some self-confidence to really get that off the ground.

I'm into fantasy/sci-fi books. LitRPG is one of my favourite genres, alongside space travel, invasion and hard sci-fi.

I'm an independent IT consultant. So I dabble a bit in a broad area of technology.

So far my #introduction

#DnD
So the class itself is essentially a Sorcerer version of Druid (kind of like Favored Soul for Cleric). You get a spirit guide who you bargain with for spells each day. That's pretty neat and way more flexible than FS.

The class really doesn't get much for weapons but it does get light armor and shields. So Elf kind of fills in the weapon proficiency. Wild Elf lets me focus in on a bow as the weapon... Which is why I was looking at Weapons of Legacy

#DnD
So I'm going to detail out here over a lot of posts my character creation work. It's just me mulling over various things.

Spirit Shaman from Complete Divine is an odd class. It has these abilities that let it fight what it defines as Spirits: Fey, Elementals, Astral creatures, Spirit subtype, and Telthors (Rokugan). The DM definitely focuses the villains on what kind of things we set ourselves up to fight so that list will become relevant.

#DnD So my current D&D game is coming to an end because we're losing a player. We're going to close out the current campaign and then start a new one. We will again be playing in the same 3.5 DnD homebrew world but a different part of it.

I am putting together my next character. I am thinking Wild Elf Spirit Shaman from Compete Divine. I want to play with the Weapons of Legacy stuff so I'm designing this family history revolving around a supposedly cursed bow.

At the moment my wife and I are working on a modern fantasy RPG. Its a labor of love and we may eventually get to a publication point but we aren't anywhere close yet. Alas our careers are too busy to devote full time to that operation.

I play in a D&D 3.5 homebrew game that is my primary gaming outlet.

Pronouns
He Him They Them